The following is a PREVIEW of the upcoming Pan Asian Destroyers which Wargaming very kindly provided me. The statistics discussed here are still being evaluated by Wargaming’s developers and do not necessarily represent how the ship will appear when released.
How would these ships rate on an Angry YouTuber scale of Garbage – Meh – Gud – Overpowered? 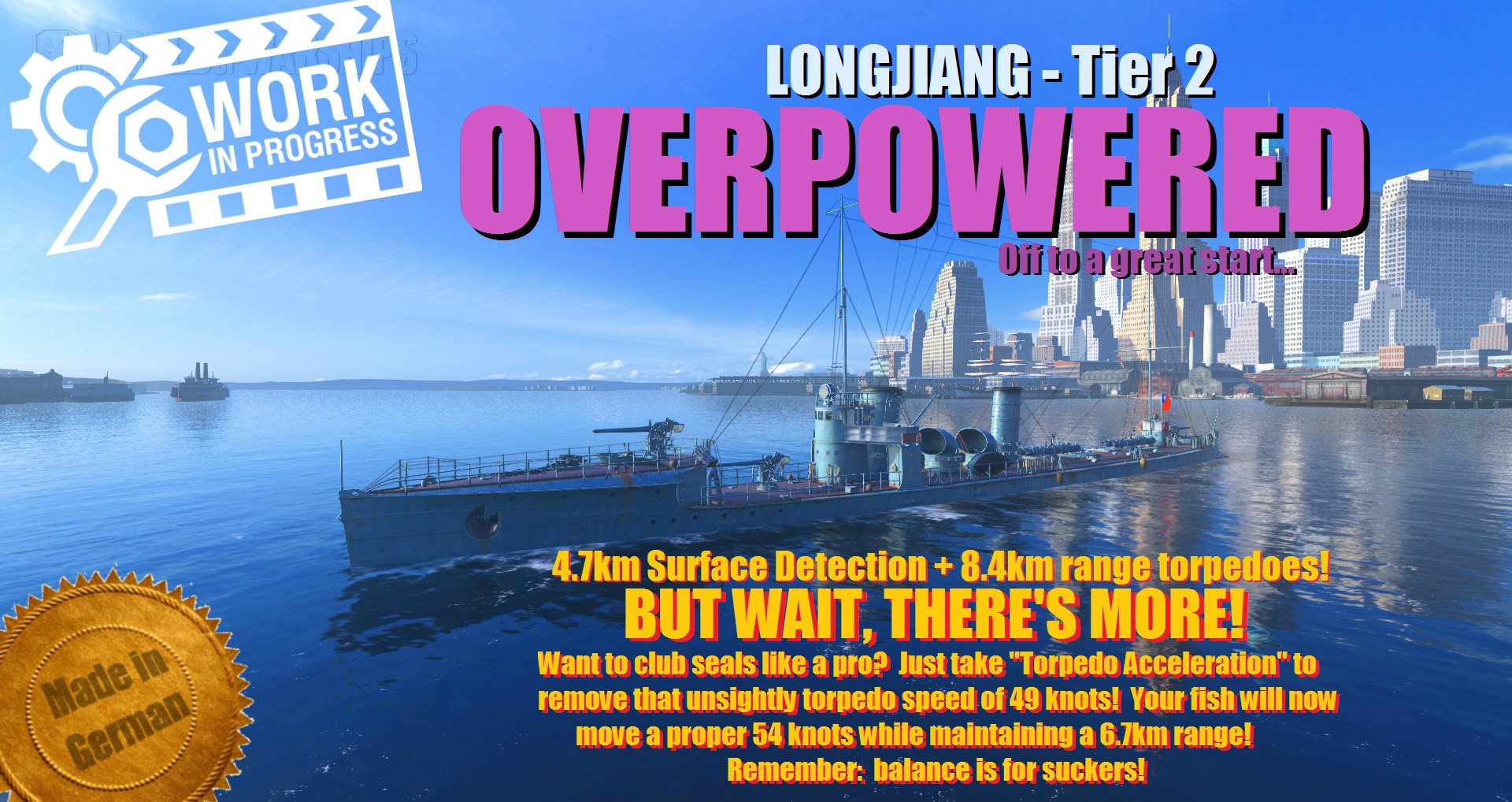 This thing is so horribly broken, it’s not even funny.  It’s not like her guns aren’t viable either.  I want to bring this thing into a tier 10 match.  Yeah, she’s that broken. 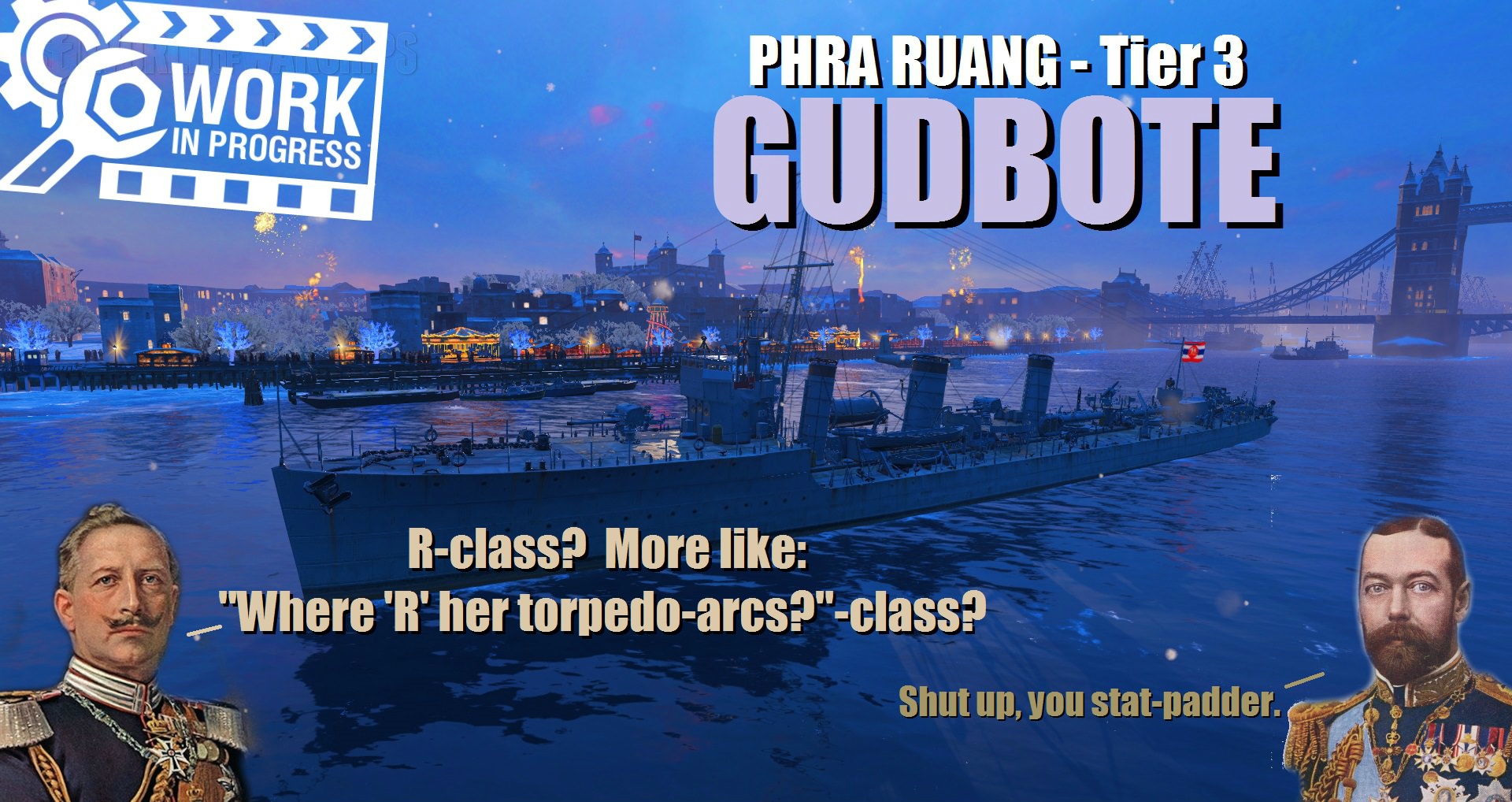 I swear, the only reason I didn’t rate Phra Ruang as ‘overpowered’ was that she doesn’t feel like an enormous improvement over Longjiang.  Her torpedo arcs are terrible.
DEEPWATER TORPEDOES
With the exception of the premiums Loyang and Anshan,  the entire destroyer line makes use of something called “Deepwater” torpedoes.  These have their own funny icon in port — being a sort of muddy brown colour instead of the steel grey with a red-tip like other fish.  Pan Asian deepwater torpedoes cannot strike any destroyer at all.  They will pass harmlessly underneath them — friend and foe alike.  This makes the Pan Asian destroyers entirely reliant upon their guns to handle enemy lolibotes in scraps on the playground.  The in-game UI will warn you when you try and target someone with a deepwater torpedo that you cannot strike.
Deepwater torpedoes gain an advantage to offset this weakness — the range at which they’re detected is reduced.  In the low tiers, this is still manageable in order to protect new players.  Longjiang has a 1.1km detection radius on her fish.  This carries through until tier 5 where it drops down to 0.8km, giving as little as four to five seconds worth of reaction time for ships they engage.  Scary stuff. 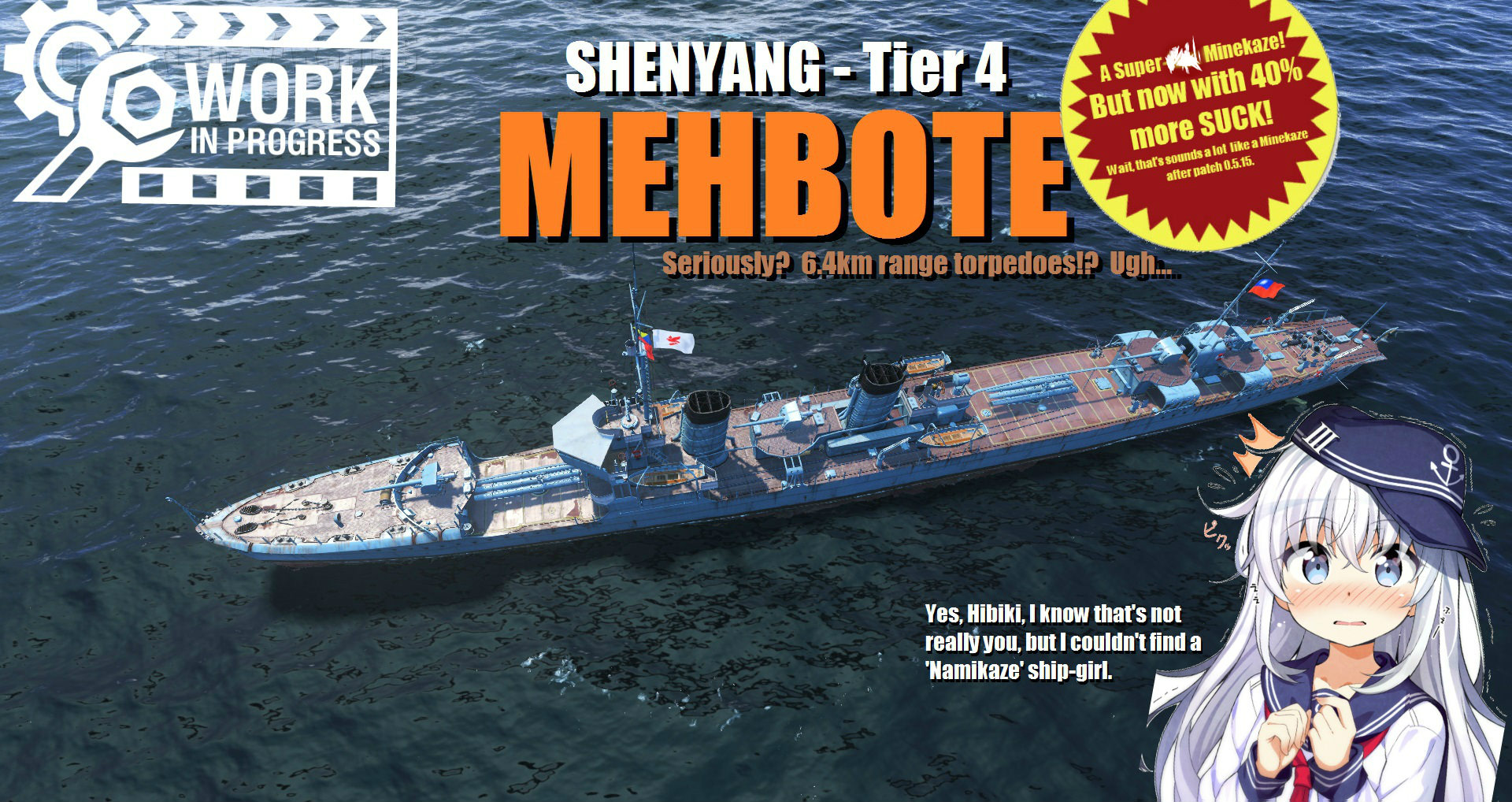 After two tiers of clubbing baby seals you get this thing. I admit, I was excited when I saw it was a Minekaze-class.  I was less excited when I saw she had two triple launchers instead of  three doubles.  But, the real disappointment is her hitting power.  Ostensibly, she’s supposed to be a balanced gunship / torpedo-boat.  Yeah, you read that right — an IJN destroyer gunship.  Remember how well that worked last time?  You can make a go of it, but it’s not a lot of fun. 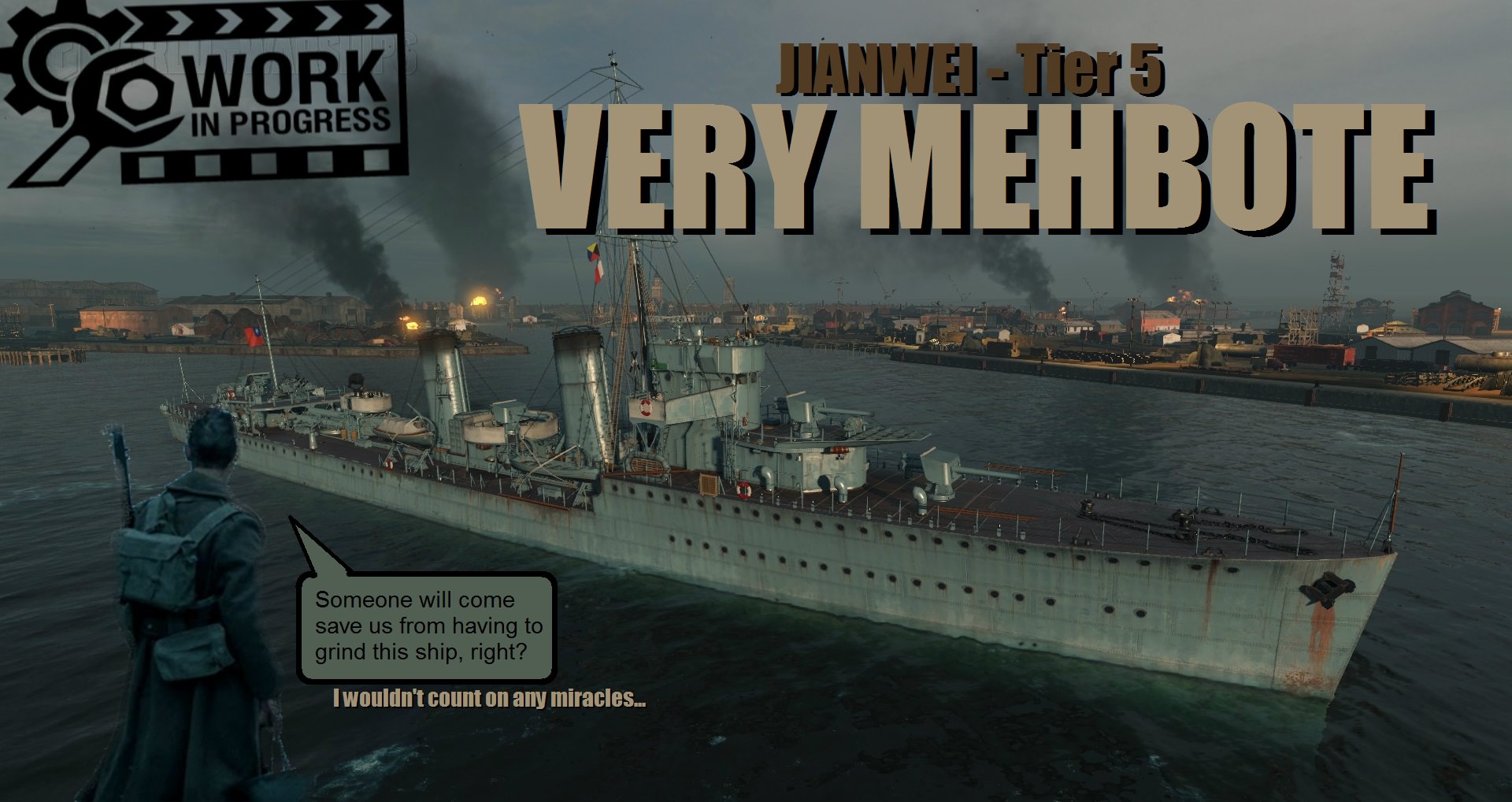 And then things get a whole lot bleaker.  Like Shenyang, Jianwei is meant to strike a balance between a gunship and a torpedo boat.  The Royal Navy 120mm/45s take some getting used to, but they do set fires well.  Jianwei is really the low-point in the line, mostly because her torpedo armament is painfully short ranged at 6.4km — scarcely further than your upgraded surface detection of 6.0km.  This is where I would be spending my free-experience if I was going to skip anything.
SMOKE GENETATORS
All Pan Asian destroyers have access to the same Smoke Generator consumable. This does not change from tier 2 to 10 and it has some unique properties which makes hella jealous.

If you did your math properly, this means there’s only 10s between when your last smoke cloud disappears and the generator is ready to be used again. With skills and signals, you can have it available immediately.  Pan Asian destroyers are very slippery in this regard.  They only get seen when they want to be seen.

Or when their player is being a total derp.  Either or. 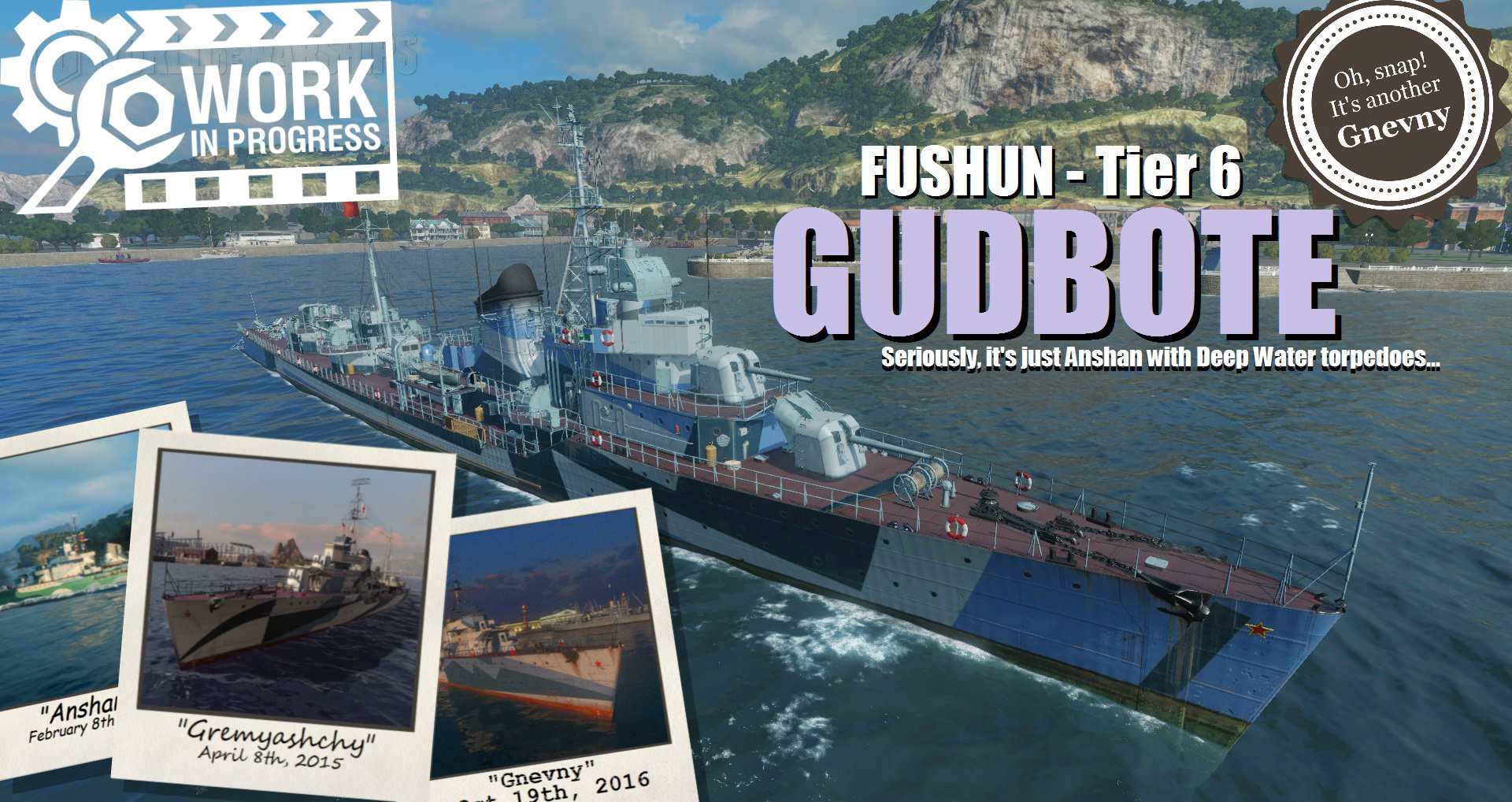 Hey, look, it’s this boat again.  These have always been solid performers.  In the Pan Asian line, Fushun is a good balance between a gunship and a torpedo boat.  In this regard, her performance sits closer to Anshan’s than Gnevny’s, with a 7% fire chance (instead of 8% of the lead) and 8km torpedoes.  If you’re like me and you’ve played this class to death, this ship may end up feeling a little dull.

Fun fact, Gnevny now has finally displaced the Omaha-class as having the most sister-ships in the game! 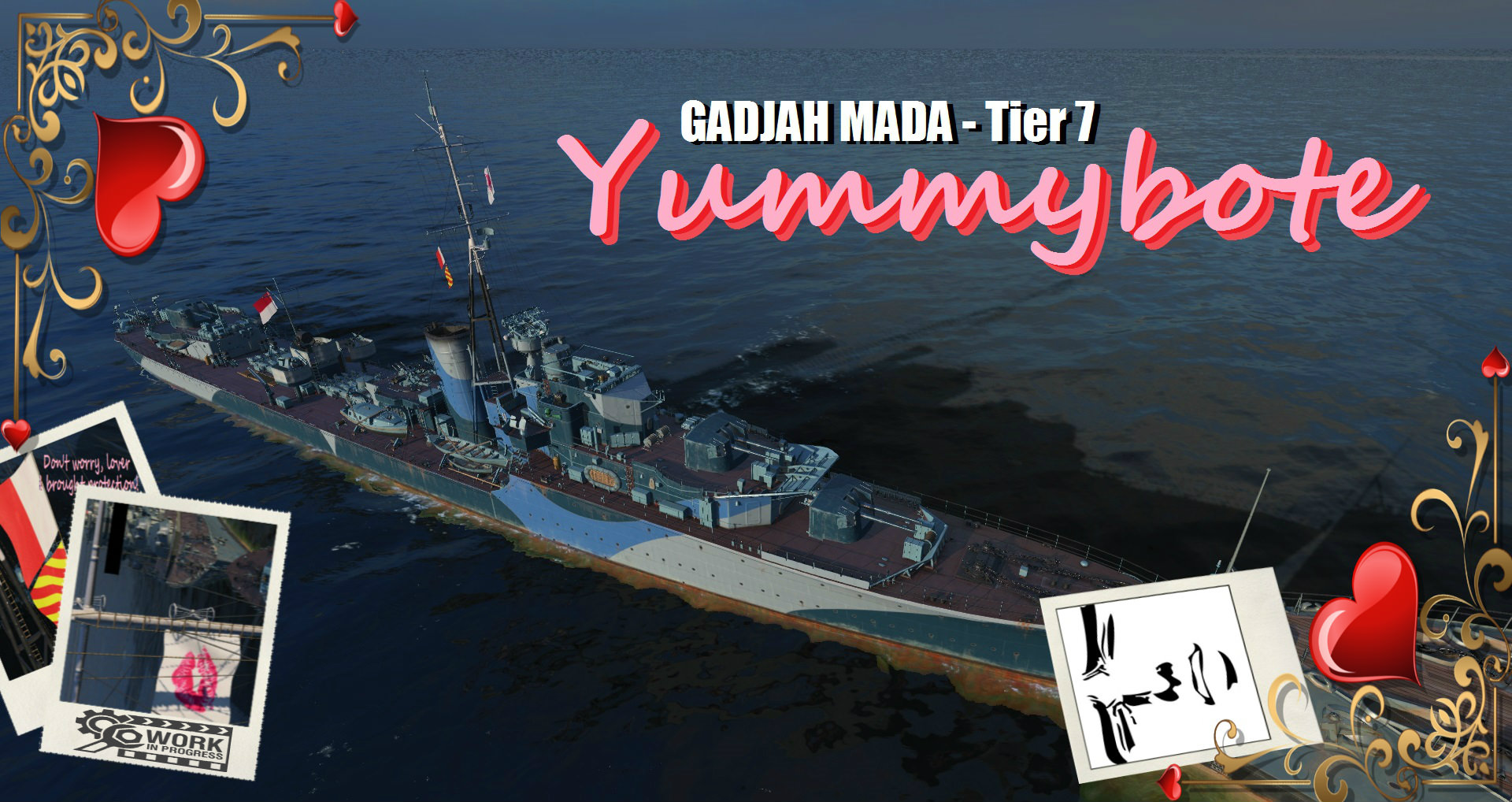 Allow me to quote Wikipedia <ahem!>:  “The design was intended as a smaller follow-on from the preceding Tribal class…”  Did you see that?  Wargaming tried to haida a Tribal-styled destroyer in the Pan Asian line! ♥

Now if you’ll excuse me, I need to go change my pants.

ORIGINS
The Pan Asian line contains destroyers from a variety of different nations, including (but not limited to) the United States, United Kingdom and Soviet Union.  As you climb up the tech tree, the style of play may change suddenly and dramatically, shifting from a torpedo-dominant meta to requiring you to play like a gunship instead.  This has pros and cons.  On the one hand, you get to try out a variety of different ships and playstyles — you’re likely to stumble onto something you really like.  On the other hand, this can feel quite jarring and unfortunate when you leave behind something you really enjoyed — it may not reappear further down the line. The two traits which unite the whole line together are their smoke generator consumable and their deep-water torpedoes. 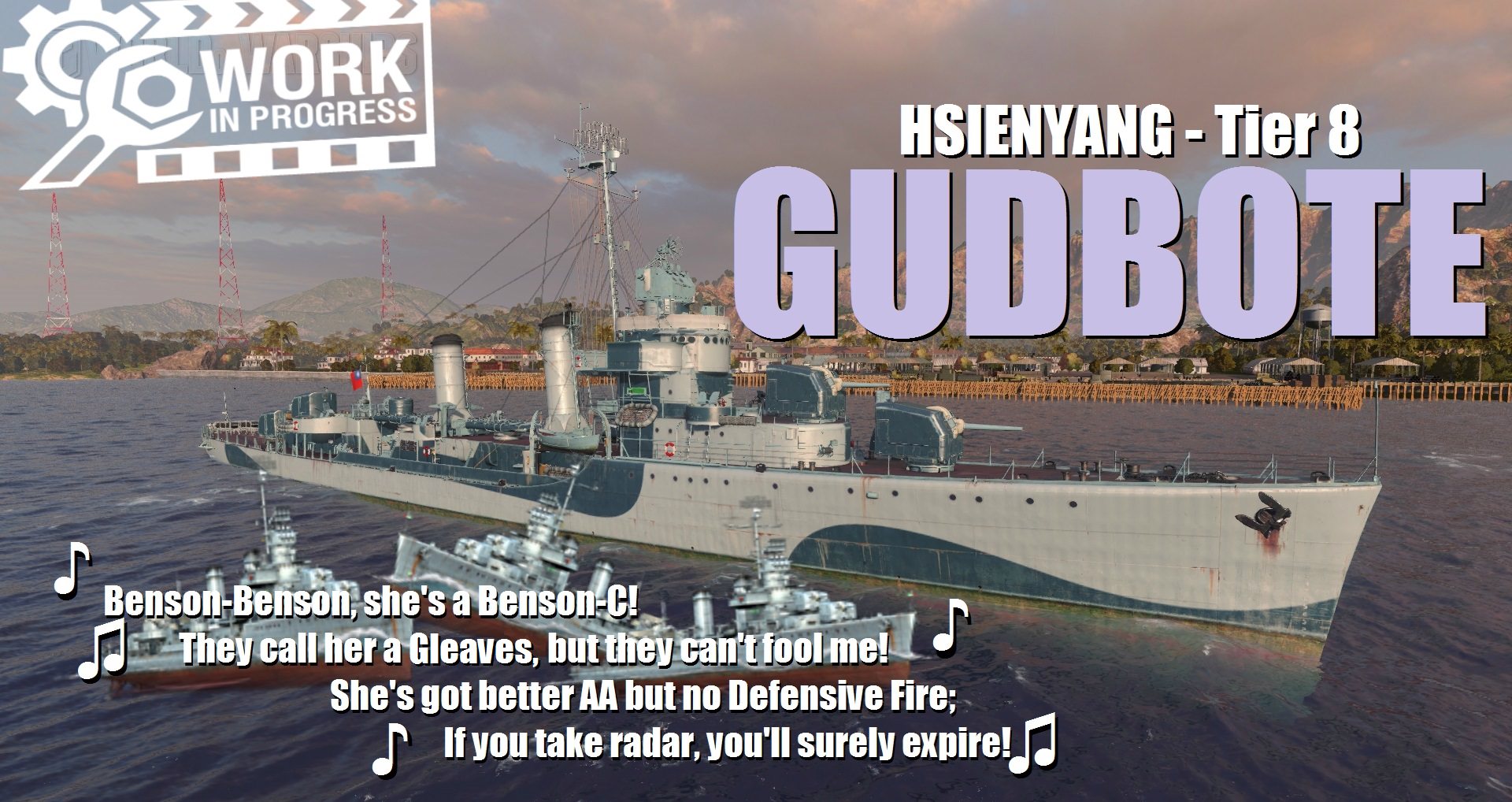 Alright, I’m back!  Where are we?  Ah, yes.  Things get decidedly American from here on out.  At tier 8+ you can take a modified radar consumable on your Pan Asian destroyers, but you have to sacrifice your Smoke Generator to do it.  Hsienyang’s radar lasts all of 15 seconds with a 7.5km range, which is super risky if you’re playing solo and relying on your team mates to drag your butt out of the fire.  In team and division play, this is a much more viable option.  Do note that the Pan Asian destroyers do not get access to Defensive Fire. 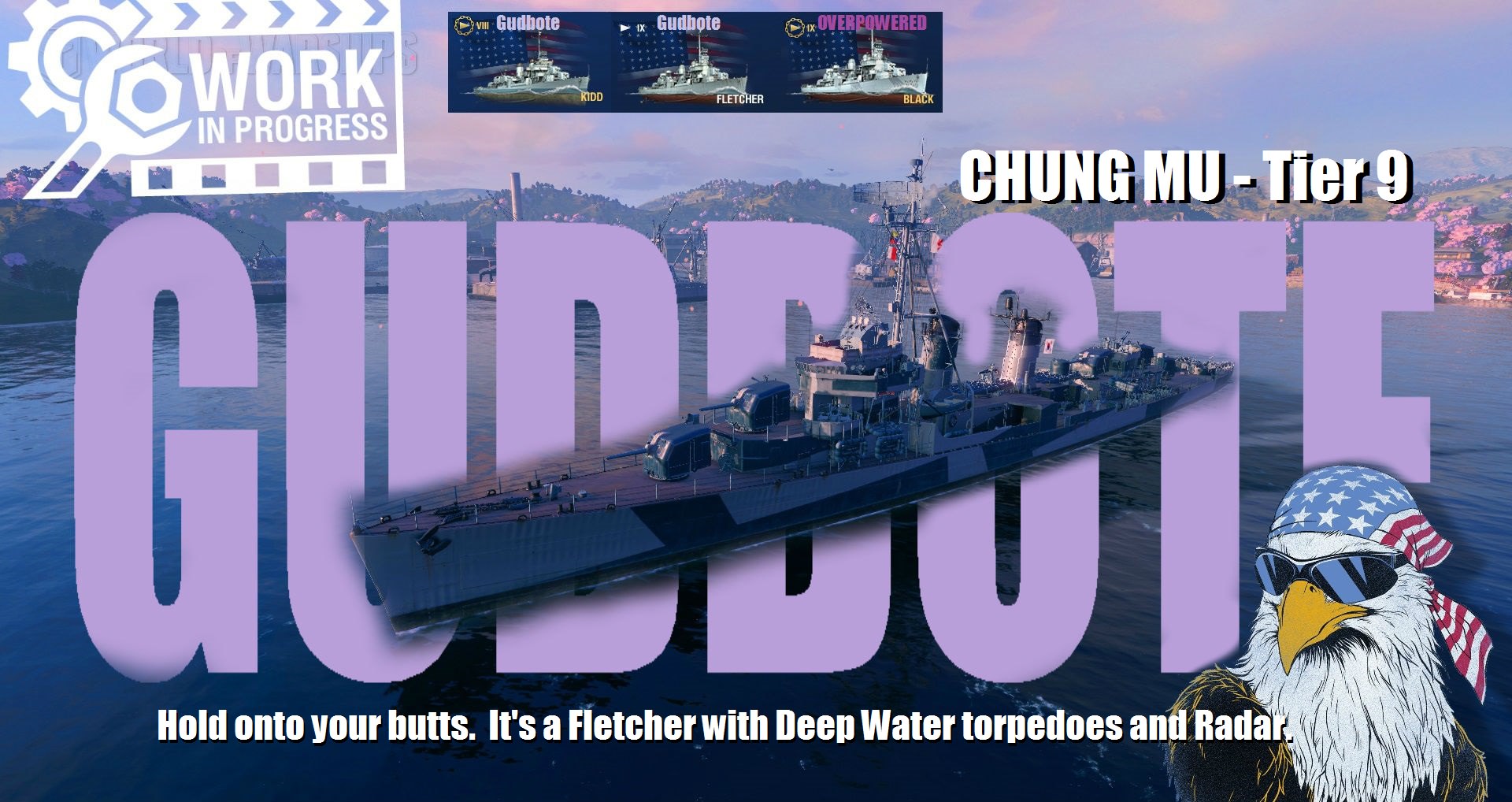 RNGesus be praised.  This is, hands down, one of the best ships in the line.  It’s a Fletcher with the same handling as USS Kidd.  Those torpedoes are absolutely horrifying with how little time enemy ships get to react.  I had a blast terrorizing battleships in this thing.  Like Hsienyang, you can swap her smoke for radar (active for 17s) which opens up all sorts of nastiness for team-play.

Fun Fact: Fletcher just bumped Anshan off the podium and now shares the honour of having just as many sister-ships in game as the Soviet destroyer. 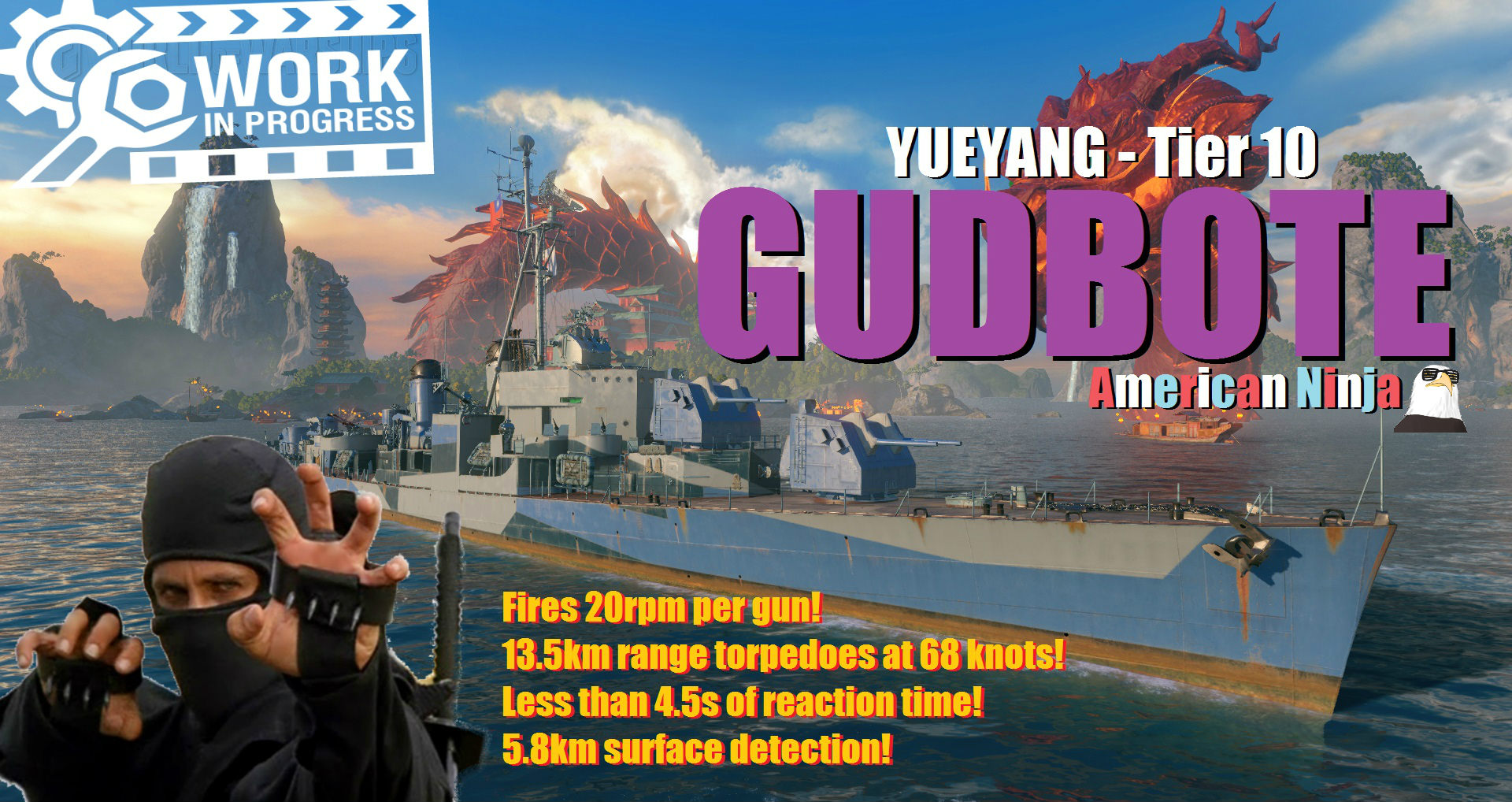 Did you hear that?  That’s the sound of Shimakaze players everywhere pooping themselves in rage that they can’t be as sneaky and as effective at sniping battleships with torpedoes as this thing.  The only thing that keeps this thing from being overpowered is her inability to hit other destroyers with these fish.  Even then, good gravy, she’s a beast.
Skip back to main navigation