The following is a PREVIEW of the upcoming Soviet premium ship Kronshtadt.  This ship was provided to me by Wargaming under the strict conditions that I look but not play her.  This ship is still in the earliest stages of development and anything can (and most likely will) change before release.

Wargaming dropped off Kronshtadt into my account on the 0.7.3 Public Test Server.  I wasn’t allowed to play her, but I am permitted to talk about what I’ve seen.  This is a quick once over I’ve done, comparing her in-port stats to ships on offer at tier 9.

BAD – One of, if not the worst at its tier. This is a pronounced weakness.
FAIR – Middle of the pack at its tier. Not terrible, but not terribly good either.
GOOD – Has a significant advantage over her tier mates. A solid, competitive performer.
BEST – No other ship at its tier does this as well as this ship 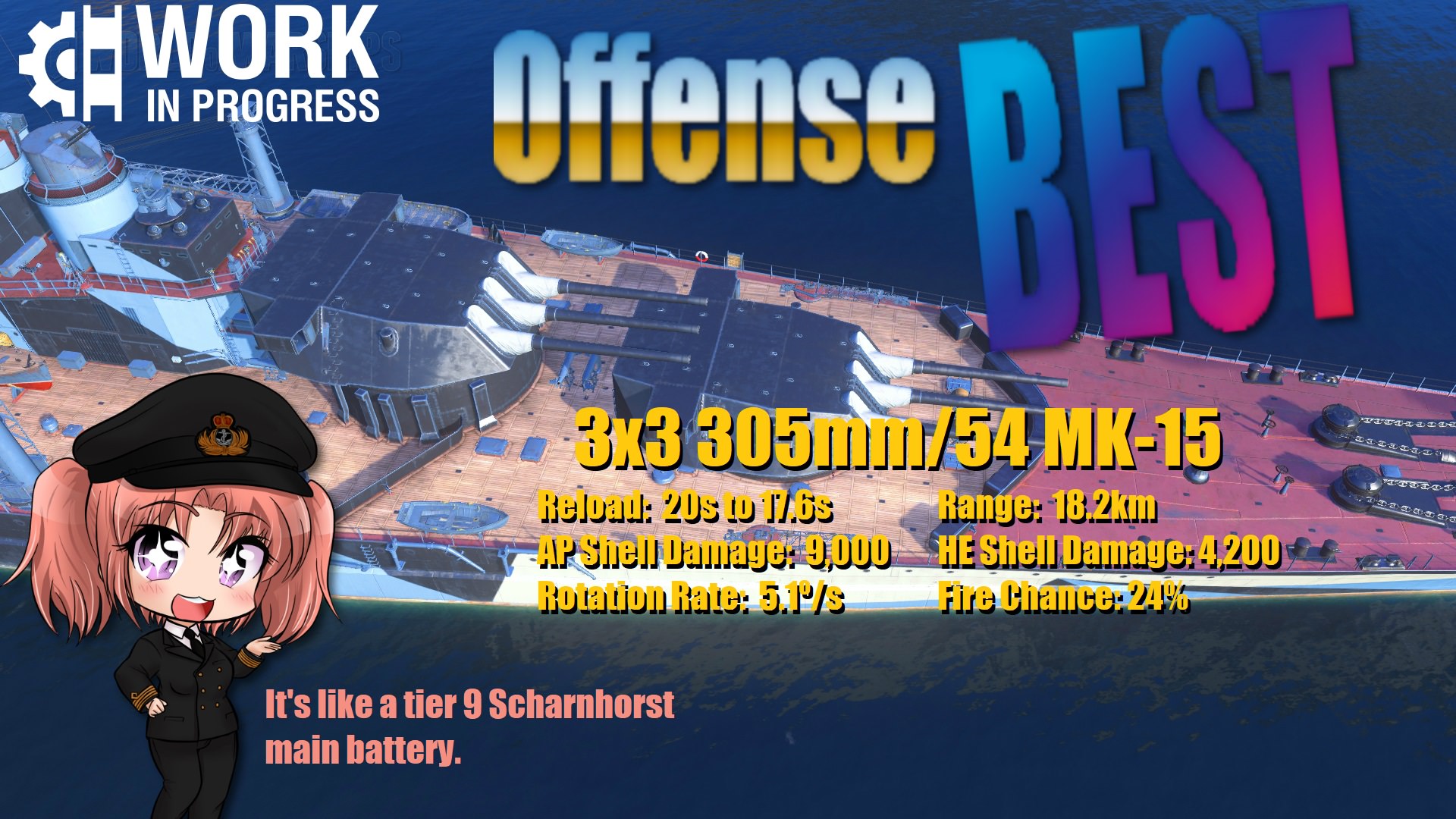 So let’s talk about her guns.  You’re getting nine 305mm guns at tier 9.  This gives you enormous alpha strike capabilities for a cruiser, battleship levels of penetration and (frighteningly enough), comparable DPM to the other heavy cruisers at her tier when you’re slinging AP.  HE wise, she’s well behind the grade, though.  This is a ship where when people angle against you, your damage potential drops into the dirt.  The only ships she’s capable of overmatching are a select number of cruisers — namely anything British or those at tier 7.The biggest drawback of these guns that I see is that you still have battleship dispersion.  If datamining is anything to go by, she only has 1.8 sigma to boot. 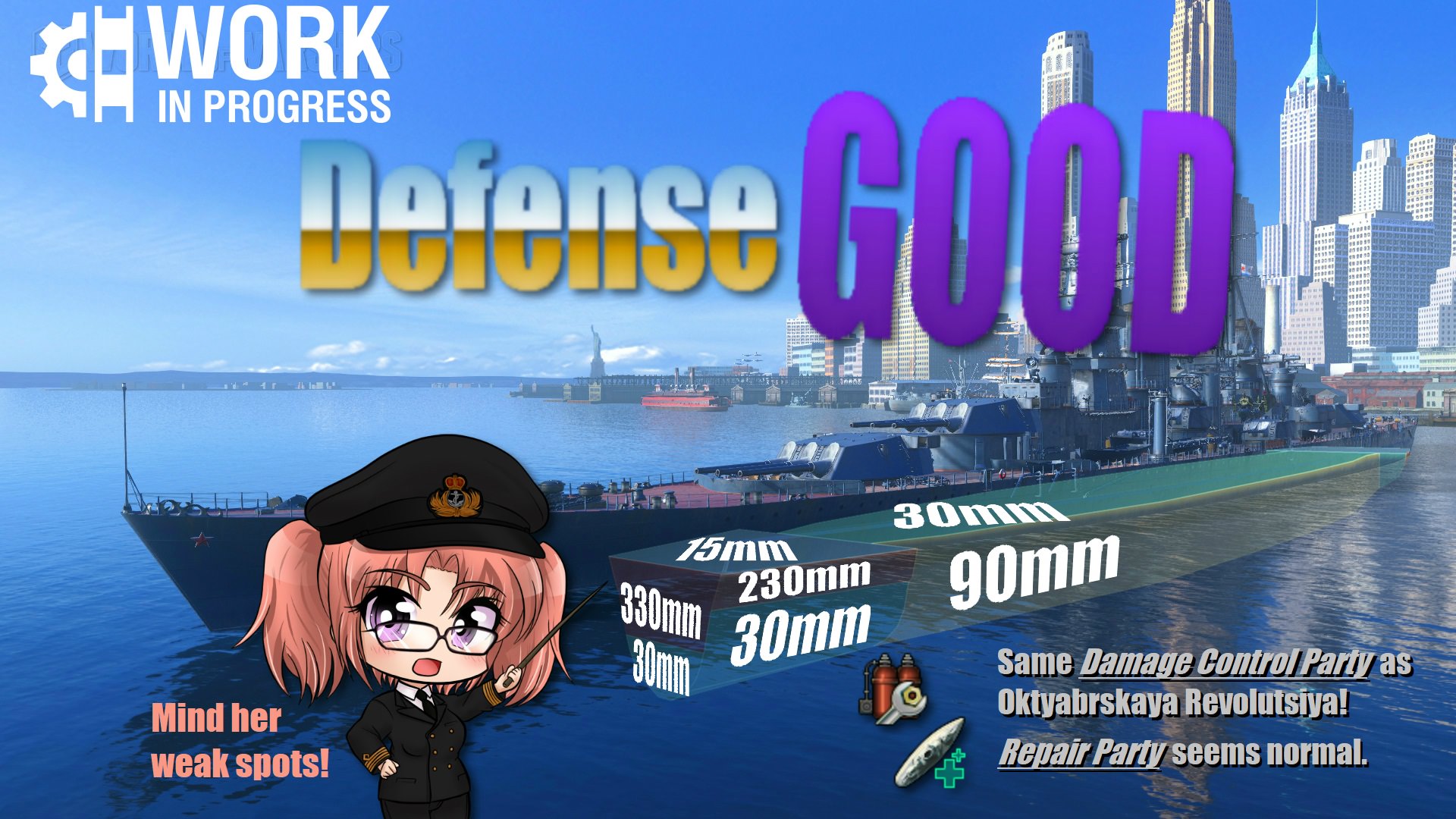 Kronshtadt’s durability looks like a real mixed bag.  She’s got a healthy slug of hit points at 59,800hp.  However, this is the largest citadel I have ever seen in relation to the ship’s size. For a cruiser, her protection seems okay.   As big as her citadel is, it’s fully submerged with a 230mm outer belt.  This means that the majority of shell fire that strikes her has to contend with a 230mm outer belt and then a 90mm citadel wall.  Even bow on, it’s not too bad.  While she does only have a 25mm bow, her transverse bulkhead is 330mm thick.

There’s some big holes though.  For one, the roof of her citadel is a maximum of 30mm thick.  This can be overmatched by République’s, Musashi’s and Yamato’s AP shells.  This means that shots that aim a little high can still citadel her.  More pressingly, there are two flared weak points fore and aft.  Here, the citadel bulges outward against the side of the ship.  What’s more, the roof of these areas is a mere 15mm thick!  That’s thin enough that even Henri IV’s AP shells can overmatch.

The last thing to consider are Kronshtadt’s consumables.  She has the same Damage Control Party as Oktyabrskaya Revolutsiya.  This is limited to three charges to begin with (which you can raise to 5 with a premium version and Superintendent) and as little as a 20 second reset timer between charges.  Her Repair Party seems normal.  It heals up to 14% of damage over 28 seconds as you would expect.  It’s uncertain how much citadel damage she can queue — whether it’s 10% like battleships & Graf Spee, 33% like most cruisers or 50% like British cruisers. 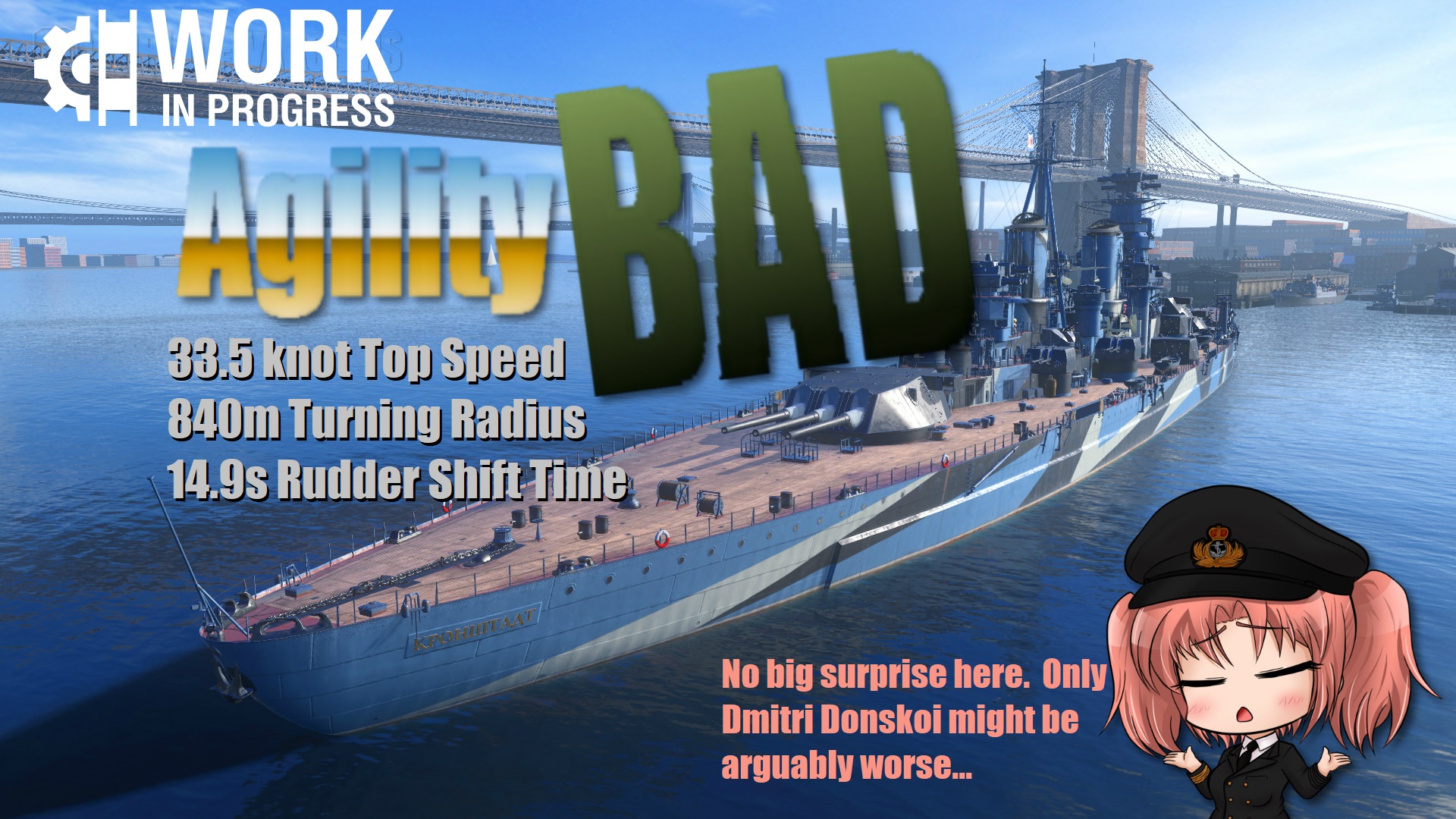 Kronshtadt has one of the largest turning circles of any of the tier 9 cruisers and a fairly average top speed.  Having been unable to take her out into game to test her, I don’t know if this turning radius value is accurate or if she has any unlisted bonuses or penalties going for her like Dmitri Donskoi or the Royal Navy cruisers do. 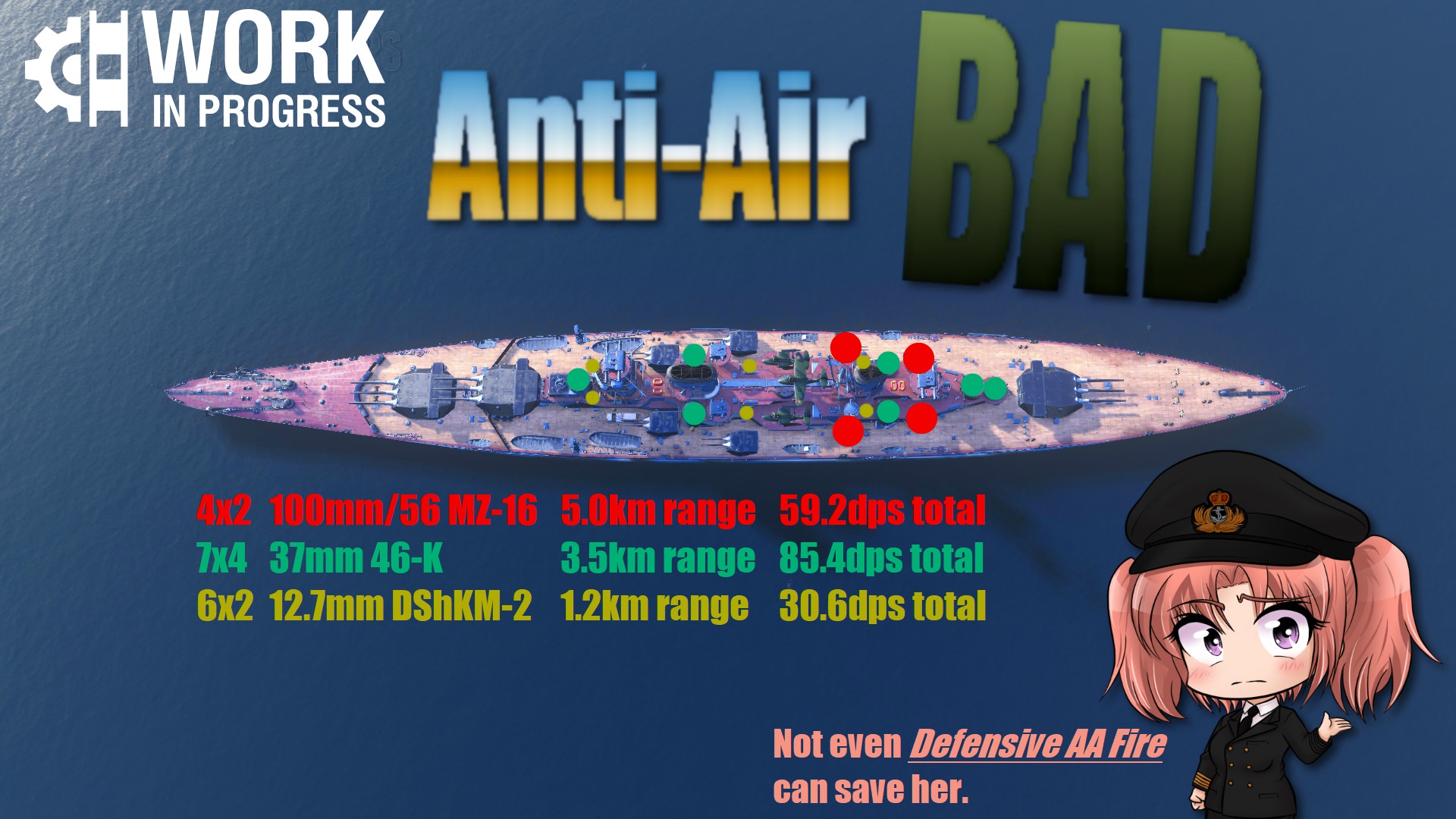 Musashi Anti-Aircraft Firepower Two:  The Electric Boogaloo.  It’s a good thing she has the option between Hydroacoustic Search and Defensive AA Fire.  Expect to be on every CV’s hit list in this boat. 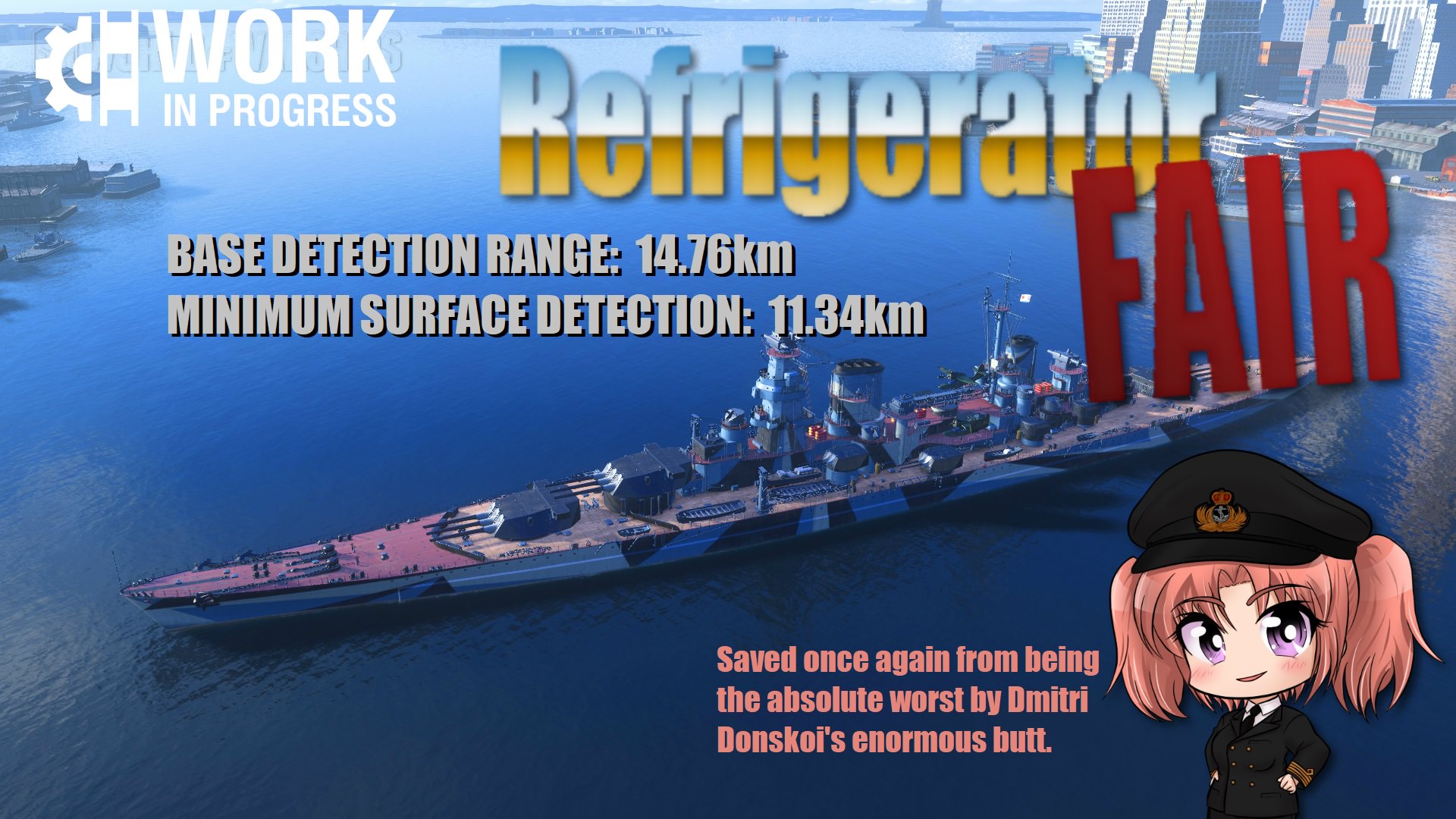 One of the bad things about this being a cruiser and not a battleship is that she loses out the 2% bonus to concealment she could have gotten from Concealment Expert.  At least she’s sneakier than HMS Lion and HMS Conqueror. 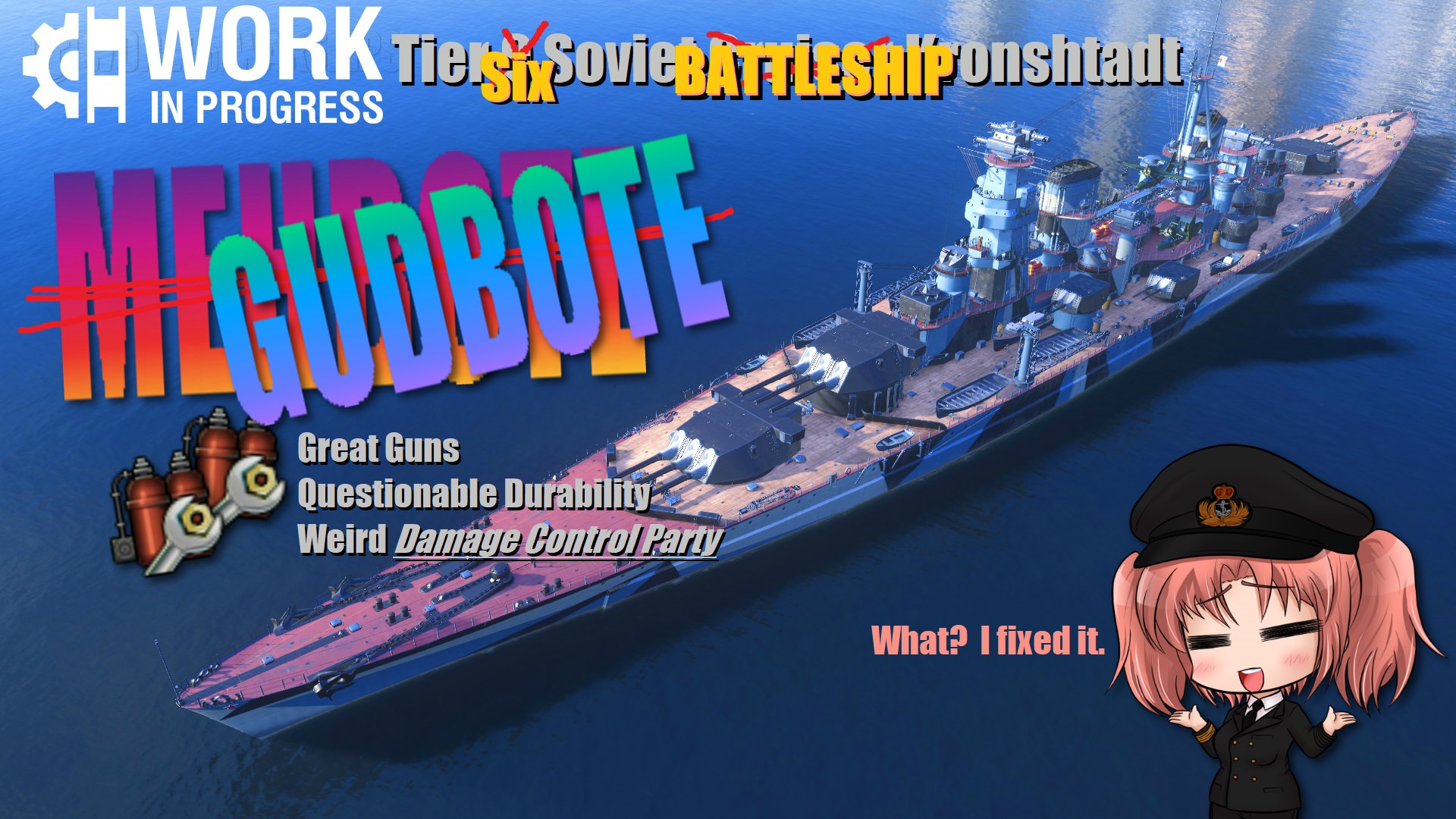 I’ve got some serious misgivings about her durability.  She won’t have the agility of other cruisers to bait shots and dodge given that her agility is comparable to a battleship. Her guns look interesting, but I want to put them through their paces and see just how much damage they can actually put out before putting a final endorsement.  All things told, I think this would have made a more interesting tier 6 or 7 battleship instead of a tier 9 cruiser.

Anyway, I’m curious to see how she will perform when I get her for actual game play testing.  Hopefully she won’t explode in welter of gore the first time an enemy battleship looks at her (though, to be fair, she wouldn’t be a cruiser if she didn’t).  I’ll take another crack at this ship when she hits the live servers before I settle down to do a full review.

I would like to thank my patrons on Patreon for their support for assisting me in putting together articles just like this.

WGC will haunt me till I die. 1 hour ago

Not getting your stats quotsignatur.. 8 hrs ago

WG straight up admitting they are b.. 8 hrs ago

People are getting the wrong idea o.. 9 hrs ago
> Red Tracker