The Ishikari class Super Heavy Cruisers (Design B65) were meant to be the last step in the Imperial Japanese Navy’s Decisive Battle doctrine. The Ishikari cruisers were meant to fight the outer ring of cruisers that protects a fleet to leave the battleships exposed to torpedo attacks and allow the IJN’s own battleships to close in and fight.

The Ishikari design was never built as war priorities meant that warship production in Japan was destined towards aircraft carriers and other war materiel. Overall, the Ishikari class Super Heavy Cruisers would showcase a possibility of how the evolution of heavy cruiser designs might have developed should the Washington and London Naval treaties not come into effect. The Ishikari were the Japanese side of this unburdened development of cruisers without treaties to hold back designs; the Alaska were the American side of it.

DISCLAIMER: Since the B65 design never received a name, I have decided to call these vessels as the Ishikari class as I’ve found them called like that on the internet.

The Ishikari class Super Heavy Cruisers would have to be implemented as unique battleships. I have done the following analysis assuming that the Ishikari class would be slotted in the game as a Tier 7 premium Battleship for the Imperial Japanese Navy. They would be borderline heavy cruisers in some respects as they were the culmination of the Imperial Japanese Navy’s heavy cruiser development, but they’d work much better as battlecruisers in the same vein as the Ishizuchi.

The armour of the Ishikari is nothing to brag about. In fact, it is terrible for a battleship, being slightly better than the Ishizuchi’s which is notoriously bad even at tier 4. As expected of a battlecruiser, the Ishikari’s armour was built to withstand impacts from cruiser guns but not battleship-caliber weaponry and as such it will suffer greatly if it ever exposes itself to an enemy’s heavy guns. The inclination of the belt means that the belt has an effective thickness of 205mm which increases even more against arcing fire so you might get a lucky bounce at long and medium ranges. The Ishikari’s deck armour is quite good as it is 125mm thick, something that no other vessel at tier 7 can boast and which could lead to the Ishikari surviving at long ranges.

The Ishikari’s armour has a good layout but it lacks sufficient thickness to repel firepower of large calibers unless angled. The Ishikari will be able to repel 8” gunfire with angling and with its good underwater protection should be able to reduce torpedo damage somewhat, after all it was designed to withstand 500kg charges. Not great armour, but the Ishikari should be relatively safe from cruiser AP rounds and dive bombers.

The presence of a battleship armed with 12” guns would seem out of place at tier 7 where all opponents have 16” guns, however there are several differences between these 12” guns and those used by lower tier battleships. These 12” guns fire a shell that is almost as heavy as the shells fired from the 14” guns of the Kongo battleships. The heavy 12” shell ensures that it is a powerful gun that should have good enough penetration to confront battleships at medium ranges, almost as powerful as a 14” shell, and cause heavy damage. Cruisers will be in awe of these guns as they have a penetration that belies their caliber. These guns fired a 517kg AP shell and there are several unknowns about these weapons such as the muzzle velocity that they’d achieve, however if we assume that the shells would be fired at a muzzle velocity of 780m/s, then they’d deal 9300 damage.

The second factor that ensures that the Ishikari won’t be undergunned at tier 7 is the ROF of these guns. Whereas the Nagato and Colorado have 8 larger caliber guns that fire twice per minute (roughly 16 shells/minute for the Nagato), the Ishikari has 9 guns that fire 3 times per minute (27 shells/minute). That puts the Ishikari’s firepower in contention due to larger volume of fire, furthermore, the Ishikari’s firepower is concentrated in the aft so it can more easily angle its armour while keeping two-thirds of its firepower active. The turrets themselves would probably have decent traverse rates, with a training time of ~42 seconds per 180 degrees. The Ishikari’s firepower is more than a match for that of the Scharnhorst, and has a higher volume of fire than any other tier 7 battleship.

This would seem to be a lackluster secondary battery due to the few guns carried, however this is actually quite decent. The guns have a very high ROF (21 rounds/min), great muzzle velocity, a range of 5km and fire HE shells which have a 6% chance to cause a fire. Whatever comes close will have fire rained upon them, each shell won’t hurt too much, but the sheer weight of fire might compensate for the few barrels carried and cause some fires.

The Ishikari has 2 quadruple torpedo launchers with one located on each side of the aft of the ship, following IJN heavy cruiser designs like the Myoko and the Zao. The torpedoes used could be any of the 610mm torpedo options used by IJN cruisers, however it’s likely that the Ishikari would use the Myoko’s upgraded torpedoes, the Type90 Mod. 1. These torpedoes are very good and powerful, having a range of 10km, a speed of 62km and a damage of 17,233. The reload for a quad launcher of these torpedoes would be 109 seconds so you’d only be able to launch a torpedo volley once every two minutes.

These torpedoes will find situational use, they’re positioned in the aft of the ship so the arc of fire would be quite restrictive and the poor maneuverability and concealment means that you won’t be doing offensive torpedo runs often. They can be used to deter whoever chases you by dropping torpedoes in their path or rather use them to ambush those who come out from islands without regards. Think of them as part of the secondary armament, good to have in a pinch but not the focal point of the ship.

The AA for the Ishikari is decent enough for tier 7, it is comparable to the Nagato’s whilst being slightly superior to the Scharnhorst’s and inferior to the Colorado. The standout of this AA suite is its long-range aura as it concentrates most of the firepower, however the AA’s efficiency does not increase noticeably as aircraft close in. It is a serviceable AA suite, but nothing more than that.

I’ve seen a design that seems to be dated to 1945 which adds an extra 6×2 25mm/60 Type 96 AA guns and 10×3 25mm/60 Type 96 AA guns. This would overturn the verdict of the serviceable AA and would in fact turn it into a very good AA suite at tier 7. The great long-range AA aura is now coupled with a decent mid-range AA aura and you should see planes suffering some casualties before reaching your place.

This would make it the joint fastest battleship in the game, and would provide a massive edge over any of its tier 7 competitors, none of them get even close to this speed! The Ishikari would have trouble turning though, but it’d be much faster at responding to threats than any of the other tier 7 battleships, even allowing the Ishikari to function as close fire support for the cruisers in the fleet. The Gneisenau would be the closest competitor for speed, but the Ishikari still outpaces it by 2 knots and cruisers at the tier will have trouble escaping from it as they are at most 3 knots faster, and some are actually slower.

The Ishikari would have the standard tier 7 battleship consumables of Repair Party, 4 charges of the Catapult fighter or Spotter plane.

The Ishikari class would be a worthy addition to the game, fulfilling a similar role such as the Ishizuchi does at tier 4. The Ishikari would bring the Japanese battlecruisers up to tier 7 with a vessel capable of engaging its targets with big guns and good rate of fire. The Ishikari would be quite a package, being capable of zipping around on the battlefield with its great speed, dropping torpedoes when chased or for ambushing, penetrating anything it finds with its great guns and whatever it can’t penetrate, it will light on fire. No enemy should feel safe from its onslaught once the Ishikari commits to it, however should the Ishikari overcommit, it will see its hitpoint pool quickly depleted.

The Ishikari would be unique in that it will be very quick as a cruiser would, it would have fast-firing (relatively) big guns and torpedoes as would be found on any Japanese cruiser but with a much more powerful armour scheme. It would be a deadly cruiser hunter that packs a nasty surprise for any enemies that dare close in on it and chase it, with enemies having to be aware that a full salvo of torpedoes could be heading their way. Its rather lackluster armour for a battlecruiser is somewhat mitigated by its inclined belt, though that only makes it slightly harder to penetrate. The armour scheme in general is solid enough to protect you against 10” guns and below, and the underwater protection is quite good. The bad AA on the battlecruiser means that it might be susceptible to air strikes, but its thick deck armour should mitigate somewhat the threat dive bombers would pose. Should WG decide to give the Ishikari its improved AA, then one of the big weaknesses of the Ishikari would be fixed and help it compete. The Ishikari is a great, if slightly flimsy, battlecruiser with quite a few gimmicks at tier 7. 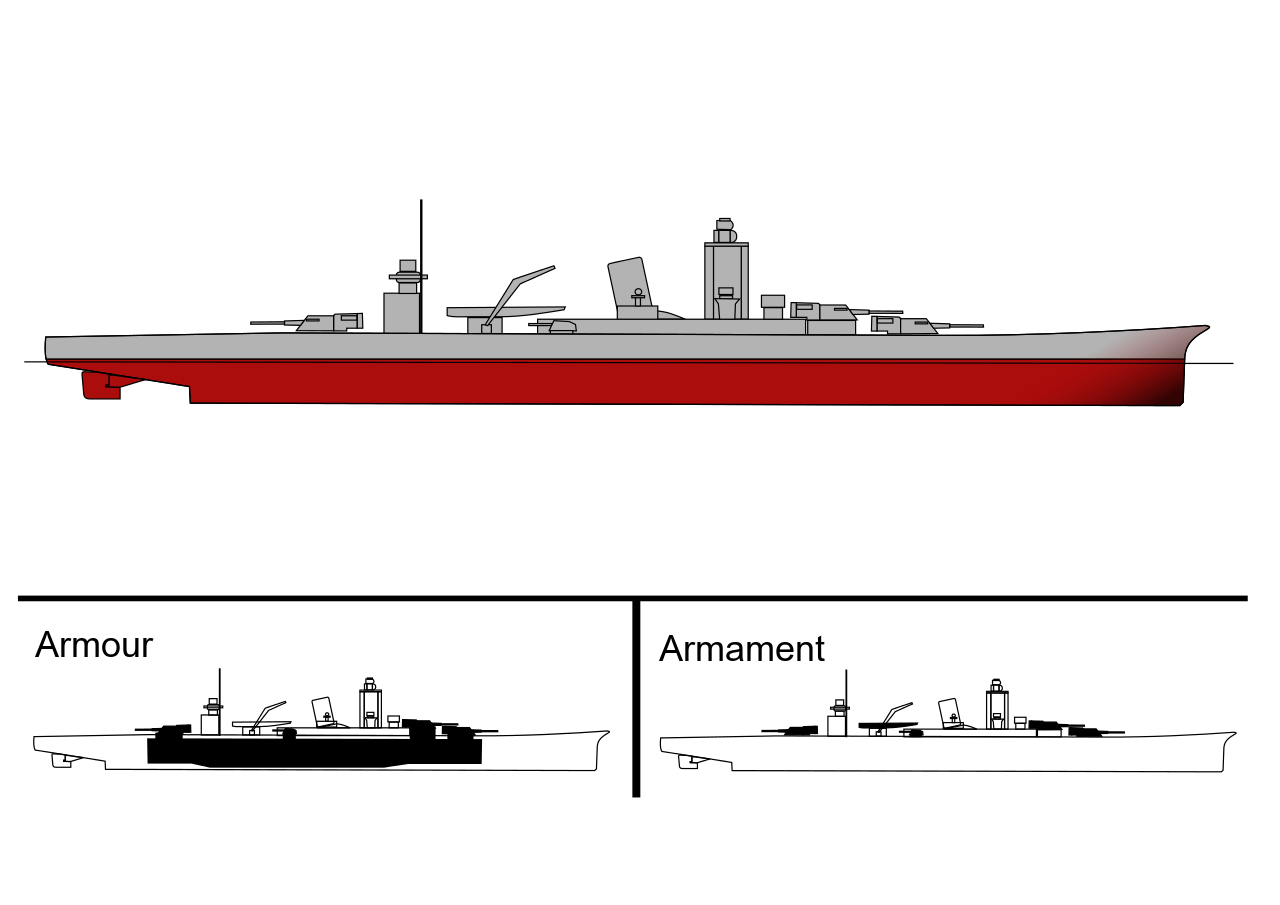 Figure 3 – Ishikari’s armour scheme
Next week I’ll be talking about the Yavuz Sultan Selim Battlecruiser, the only battlecruiser of the Ottoman and Turkish Navy.
Skip back to main navigation

The new US Battleship line looks co.. 1 hour ago