The Thonburi class Coastal Defence Ships were ordered as part of the Royal Siamese Navy’s naval expansion program in the buildup to World War 2. Designed as classical coastal defence ships, they would be the most powerful vessels possessed by the Royal Siamese Navy at the outbreak of World War 2. Built by Kawasaki Shipbuilding Co. in Kobe, the Thonburi class had a distinctly Japanese design and hull lines reminiscent of Japanese heavy cruisers. Laid down in 1936 and commissioned i 1938, they were the last coastal defence ships to be built in the world.

Referred to as “battleships” by the Siamese press at the time, the Thonburi class Coastal Defence Ships were a marked improvement over the previous ships in the Royal Siamese Navy both in gunnery power, displacement and protection. The ships carried four 8-inch guns like those carried by early Japanese heavy cruisers in two twin turrets, a gun director for aiming the main guns on a tower above the bridge, a decent anti-air battery, german diesel engines and up to 4 inches of armour plating. The Royal Siamese Navy so enthusiastically received these ships that the acquisition of more was contemplated by the government but ultimately it was decided that the the acquisition of two light cruisers from Italy was best.

The ships were involved with the defence of Thailand’s coats during the brief Franco-Thai war, with HTMS Thonburi participating in the Battle of Ko Chang on the 17th January 1941. HTMS Thonburi was heavily damaged in the fighting and was beached to avoid her sinking. She was later raised, repaired and continued serving in the Royal Thai Navy as a training vessel until being stricken in 1959. Part of her bridge and forward gun turret are preserved as a memorial at the Royal Thai Naval Academy. Her sister ship, HTMS Sri Ayutthaya arrived too late to participate at the Battle of Ko Chang and didn’t feature in any engagements during the Second World War. She would perform the duties of Royal Yacht twice, in 1938 and 1950, and was regarded as the Navy’s flagship until her sinking during the Manhattan Rebellion in 1951.

The Thonburi is an extremely small and light ship which is reflected in it having the lowest hitpoint pool at its tier, being 700 hitpoints lower than the Novik and a massive 8300 hitpoints lower than the Diana. Those hitpoints may last a bit longer due to the armour the ship carries, but you’re still going to have to take extreme care with your hitpoints. It’s also worth pointing out that the rather tall and large superstructure means that the concealment is likely to be quite poor.

The Thonburi class has the thickest armour at its tier, though this is a tier dominated by scout and protected cruisers which often only have an armoured deck, with a belt of 63.5mm, heavily protected turrets at 102mm and two armoured decks which have a total thickness of 63mm. Most often your tiermates will find their shells shattering if they hit the Thonburi’s belt, deck or turrets, however the amount of space protected by armour is rather small. The belt and 25mm deck cover only the machinery spaces without extending beyond them, whilst the 38mm deck covers the whole ship; there is no further armour anywhere on the ship except for the turrets, barbettes and the conning tower. A robust scheme, the lack of integral plating throughout the ship and the prominent superstructure means that it will be a prime target for HE spammers, though it should be quite safe from citadel AP hits.

The Thonburi carries four 200mm rifles which are the same as the stock ones on the Furutaka with a single difference, a better rate of fire. These guns are not as powerful as the 203mm rifles used by the IJN heavy cruisers as they fire a lighter shell which results in 200 lower damage for their AP shells, but compensate for it with a higher muzzle velocity which results in slightly lower shell-to-target times. In terms of individual performance, these guns are excellent with powerful HE and AP shells weighing 110kg and having a muzzle velocity of 870m/s. The HE shells deal 3300 damage and have a 17% chance of causing a fire while the AP shells deal 4500 damage; additionally, these shells are capable of overmatching the extremities armour of all cruisers within the Thonburi’s matchmaking spread. The rate of fire buff to 4.5 rounds per minute would mean that the Thonburi can keep up with its tiermates in a DPM race, however it’d still be amongst the worst at its tier, and at a training rate of 5 degrees per second, you’ll be sorely pressed to keep up with fast moving targets at short range.

These guns will do their best work at long range, and due to the tall mast on which the gun director is mounted, which the Thonburi should have an excellent one of around 13km. The Thonburi shouldn’t just try to snipe enemies at extreme range as it uses the same dispersion model as the Graf Spee making it less accurate than normal cruisers, and even with a Sigma of 2 it will be tough to hit enemies accurately at maximum range as the ships at these tiers are rather small. 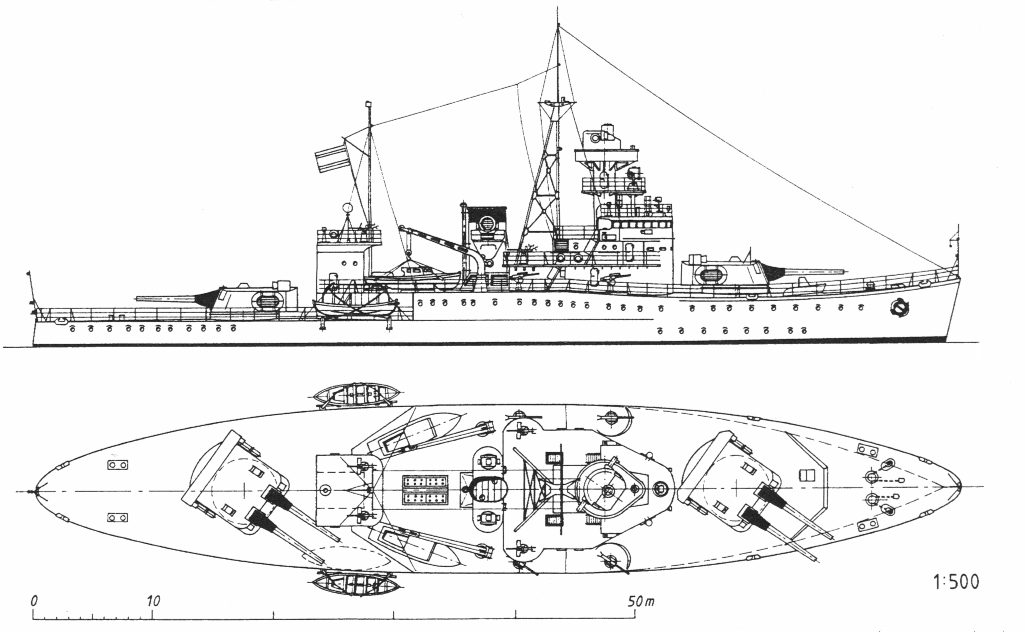 The Thonburi’s secondary battery is quite light for its tier with only two 76mm guns able to fire on the broadside. The 76mm guns however are still useful at this tier as most cruisers at this tier have 6-10mm plating and as such the 76mm HE shells can penetrate if they hit. Their 15 rounds per minute, 1300 damage and 5% fire chance mean that they might be capable of just taking the last sliver of health from destroyers or cruisers that stray within their 3km range.

Any ship which has an AA suite at tier 2 is already ahead of the curve, and the Thonburi is well ahead of it. It has an AA potential which is better than all tier 3 cruisers and battleships except for the Katori, should you manage to meet any kind of aircraft, they will be punished if they loiter around. It’s a really good AA suite, which will go unused in 99.9% of games.

The Thonburi is the slowest thing at its tier by a full 2.5 knots to the Mikasa, 3.5 knots to the Diana and 8.5 knots to the next slowest cruiser. The good part of all this is that the Thonburi’s turning radius is going to be really tight as it has a rather amazing length-to-beam ratio of 5.4 so you might just be able to manoeuvre around islands and torpedoes quite well.

The Thonburi would be a great, if unspectacular, ship to get into the game. It will be a unique experience at tier 2 where it will behave as a long range sniper in a tier where combat is usually done at very close ranges and it claustrophobic maps. It represents an archetype of ship that isn’t present in the game and would bring in a new dimension of play; it also has the added benefit of historical significance as it pertains to the Battle of Ko Chang, its role as the Royal Yacht and the flagship of the Royal Thai Navy. In terms of combat capabilities, it will not be overpowered as it lacks the hitpoint pool to be under sustained attack, the speed to dictate engagement ranges and the cadence of fire to compensate for poor dispersion. The guns themselves will prove to be superb against whatever target they hit, though their poor traverse rate means that they perform the best at mid-long ranges where the enemy won’t be able to out-turn them; the big downside to them is the platform they are mounted which means they’re not as accurate as other cruisers and it’s extremely fragile against all attacks except for those that hit the belt or turrets, with just a couple of torpedoes being capable of sinking you.

The Thonburi isn’t meant to be the most competitive of ships and at tier 2 it is crucial that she not be overpowered to break the balance of power at its tier. She’d be an interesting ship to play and would be great as a reward for a campaign or as a cheap premium. A great and different port queen she’d be! 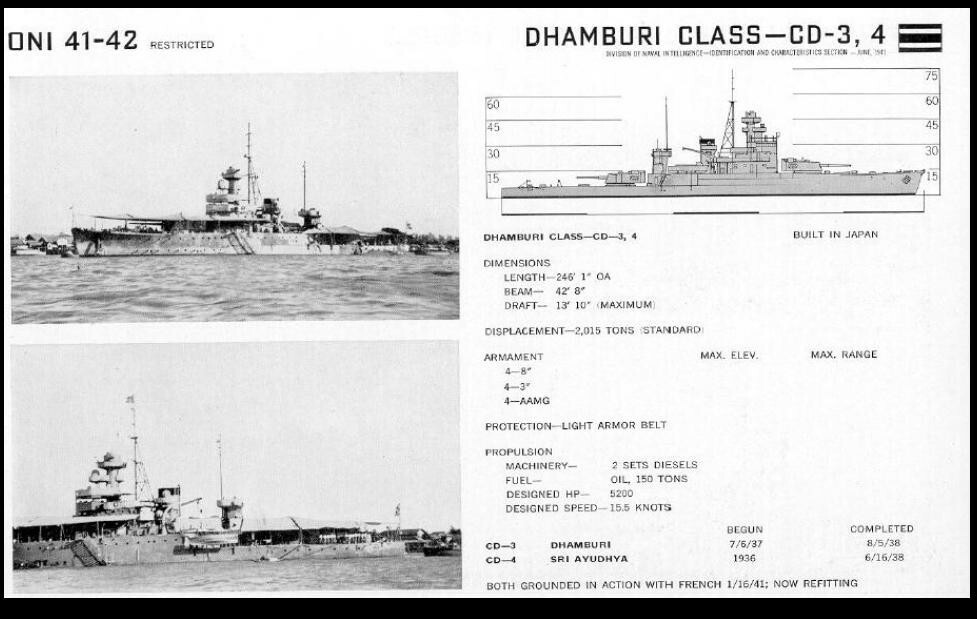 1 thought on “A Detailed Look At: HTMS Thonburi”

What is being done about cheating m.. 14 hrs ago

Wargaming, I have a conundrum. 17 hrs ago

We are not Poles. 3 days ago
> Red Tracker